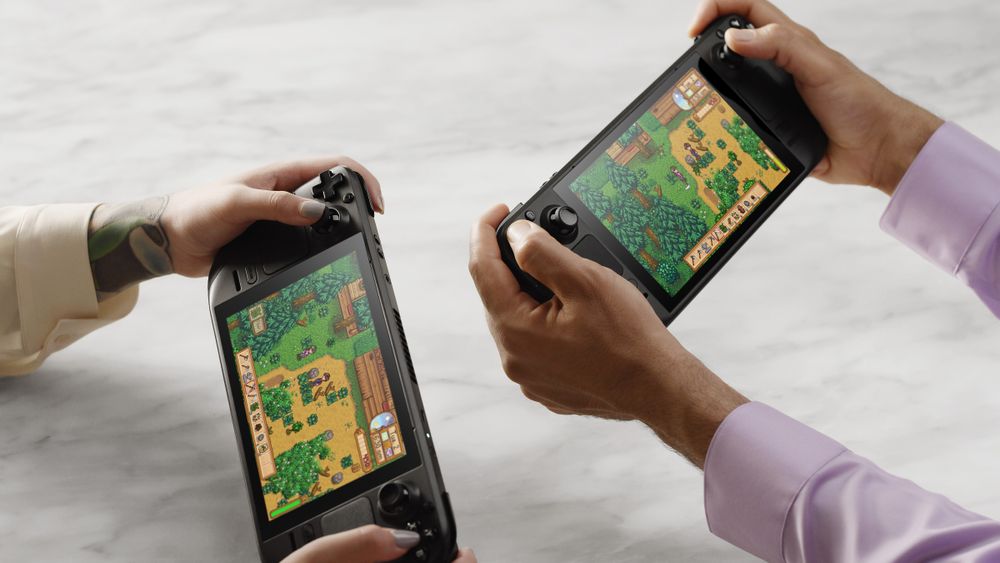 Valve announced a handheld console, and the gamersphere erupted! Here's what we know about the Steam Deck.

If you've been living under a rock (or haven't been on social media since Thursday), then you might've missed one of the biggest gaming announcements of the year... the Steam Deck! Think of the handheld gaming device as a Nintendo Switch, but for PC gaming. And the masterminds behind it? Valve.

Deja vu, who? Six years ago, Valve released a line of Linux gaming consoles that famously went down as one of the *biggest* tech flops known to man. But they're back for round two, and this time they're promising to strike gold!

According to Valve, the 7 inch handheld gaming device works like a portable PC; it can be plugged in to a monitor or TV, be used to install apps and software, watch videos and more. Sounds like a dream! But is it all talk, or are we *really* in for a treat?

The Steam Deck will release in three different storage configurations: 64GB, 256GB and 512GB. For the ultimate gaming experience, the higher the better! Although all three will offer MicroSD for further expansion.

The console will run on an AMD APU; a chip built around two key AMD architectures - Zen 2 and RDNA 2. The result? Exciting, bold graphics! In fact, the Steam Deck's capabilities sit in line with the PlayStation 4 and Xbox One. Not bad for a 7 inch handheld console.

In terms of the screen, the Steam Deck measures in at 7 inches, with a 1280x800 resolution display, 60 Hz refresh rate and 400-nits brightness.

So far, so good! But the main thing to worry about appears to be the battery life. At 2-8 hours, depending on what you're doing, it could be a real issue for gaming marathoms, trips and more. Especially when it comes to more demanding games!

Do you think it's worth the hype? And could it *really* be the end of the Nintendo Switch? It's an excitement announcement, and we'll definitely cop! But Mario and Zelda might just be safe for now...