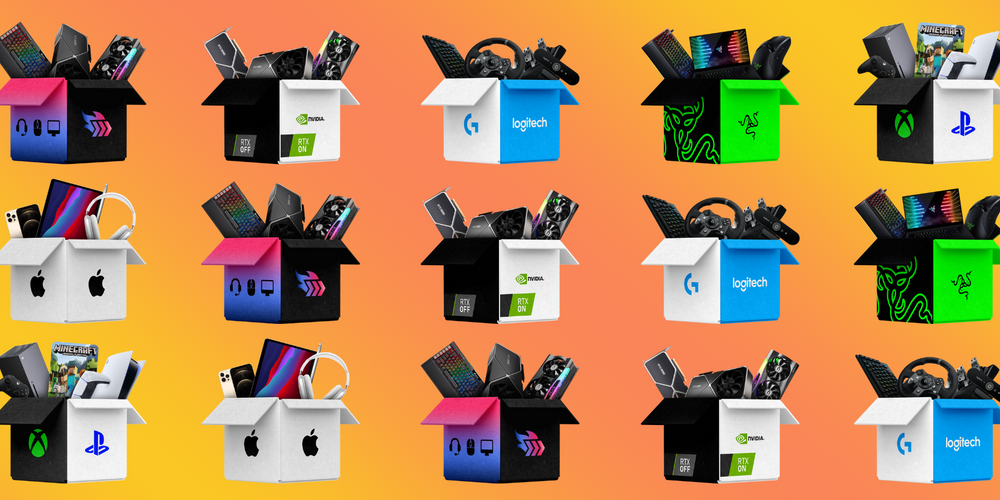 From Logitech to PS5 Vs Xbox, here's the Tech Mystery Boxes you should be opening on HypeDrop!

Swapping sneakers for a setup? At HypeDrop, we know a thing or two about great technology. And in our Mystery Boxes, we've packed the best of the best. Here's what you can open, right now!

On a budget, but want to boost your setup? We've got the perfect solution! With Setup Booster, take to the gamersphere for an experience like never before. Setting a new benchmark in home entertainment, this budget Mystery Box is the answer to your prayers. For only $3.03, you could land on Logitech, Elgato, Razer or a fan-favourite title for your PC. And if you're as lucky as Cedric, Coma or Finey, you might just walk away with a NVIDIA GeForce RTX 3090 Founders Edition. Not bad, eh?

Unbox Setup Booster for $3.03 on HypeDrop!

It's a HypeDrop classic, with a game-changing pay off! With 5% Ray Tracing On, you're the closest you've been to pulling the holy grail of graphics technology. Bursting with power, this budget Mystery Box is packed with EVGA's, MSI's and NVIDIA's finest, and a 5% chance of taking one home. To join the ranks of Master Chef and transform your PC gaming experience, you know what to do.

Make way for Logitech! The high-performance brand is yours for the taking in this namesake Mystery Box. From the beloved software brand, revamp your setup with stream cams, gaming keyboards, wireless mice and beyond. For $43.69, you'll always land on an item from Logitech, be it the M185 Wireless Mouse or K360 Keyboard. Like Tavdog, you could even pull the G923 PS|PC Racing Wheel & Pedals. Feeling lucky?

With a reputation built on reliability, Razer is an A* choice for an envied setup. And on HypeDrop, we've dedicated an entire Mystery Box to the brand! For $44.55, you could land on the brand's finest kit; from the Kiyo Pro to the Pro Type Ultra or Viper Ultimate. And if luck's on your side, you could take home the Blade 15 Gaming Laptop for 1/58 of the retail price. We wonder how Cool, Der Quoten Pol and Paulorox are getting on with theirs?

Why settle for one when you could pull both? In PS5 Vs Xbox, we've combined the biggest names in gaming technology. Packed inside, there's the elusive console from Sony, Microsoft's Series X and S and a selection of ultimate accessories. Joined by some of the biggest titles of the last two years, including Death Stranding and Marvel's Spider Man, this mid-tier box is a celebration of gaming! Could you be the next Ravermike, and pull a PS5 for less than $50?

There's a reason it's a brand powerhouse. Packed with dream gadgets and nifty accessories, Only Apple is a Mystery Box you shouldn't browse past. For $64.33, you're guaranteed to pull one of Tim Cook's finest! Will it be the HomePod Mini, a set of AirPods, an iPad Pro or the iPhone Pro Max? If you've got One Face Frankfurt's luck, it could be the latter.

That's not all! From Corsair to Sony, there's plenty more Mystery Boxes to get your teeth stuck into.