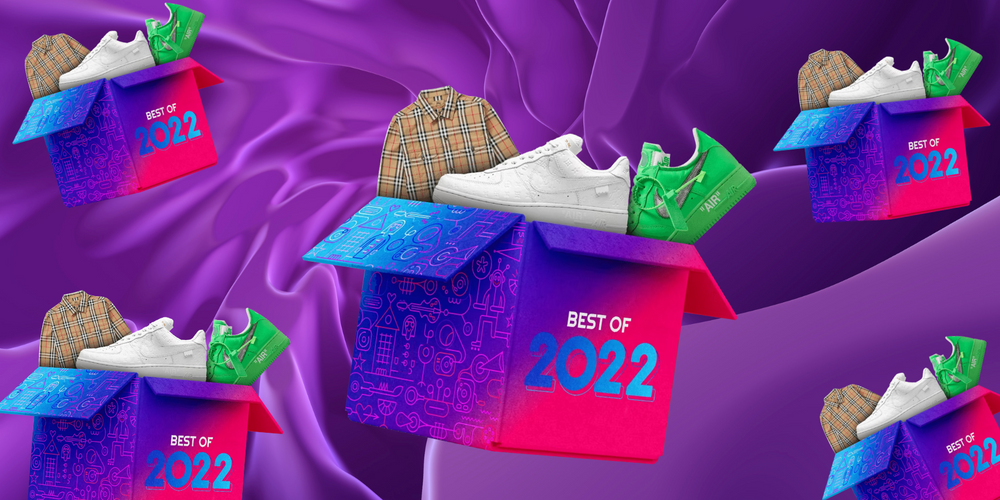 Packed with the hottest drops of the previous year, it's one of our most popular Mystery Boxes yet!

What do you do when a new year begins? Some people set goals, and others embark on a healthy routine. But at HypeDrop, we bring together the hottest drops of the year before in one ultimate Mystery Box! Appropriately coined Best Of 2022, this collection combines Jordan with Dunk and Supreme with Burberry. It's packed with low tops, high tops and everything in between. And unsurprisingly, it's fast becoming one of your favourites.

But is it popular for profit? Or is it the contents of Best Of 2022 that are making waves? Let's take a look!

There's a fair few sneakers up for grabs in Best Of 2022. But one brand stands out. Any guesses?

Packed with Jumpman's finest from the previous year, this Mystery Box is a sneakerhead's dream! The Jordan 1 Mid Anthracite, Jordan 4 Retro Blank Canvas and Jordan 1 Mid French are just some of the pairs up for grabs. And elsewhere, the Jordan 1 Retro High OG Chicago Lost and Found makes an appearance. But above all, Travis Scott's Jordan 1 Retro Low Reverse Mocha steals the spotlight. On the resale market, they'd set you back almost $1,500!

Joining MJ's finest in Best Of 2022 is Dunk! And what a year it was for Nike's most-wanted silhouette.

Having resurfaced in 2020, the sneaker's growth has been unstoppable. From collaborations with Ben & Jerry's to The Grateful Dead, sneakerhead's have been climbing over themselves to catch a pair on the resellers market. But why turn to a scalper when you can turn to HypeDrop? In Best Of 2022, the Dunk Low x Union Passport Pack, Dunk High Blue Chill and Dunk Low Raspberry unite. Joined by this year's stand out colourway - the Dunk Low Syracuse - there's great opportunities behind that big spinning wheel.

To pair with your sneakers, we've thrown a small selection of apparel into Best Of 2022. And to no one's surprise, it's mostly Supreme!

Last year, the Brooklyn-based brand released a capsule collection with British fashion house Burberry. The collaboration sold out almost immediately, but in Best Of 2022, you can grab the duo's Denim Trucker Jacket, Box Logo Hooded Sweatshirt and Tee. And if highstreet apparel's more to your liking, then Travis Scott's Jordan drop is up for grabs too!

Jordan and Dunk aren't the only sneakers to pop up in Best Of 2022. In fact, Travis Scott's Air Max 1 in Saturn Gold and Off-White's Air Force 1 Low in Brooklyn have also been packed into the collection, alongside a few of Adidas' major stand outs. But in this Mystery Box, they won't wait around for long... and neither should you!