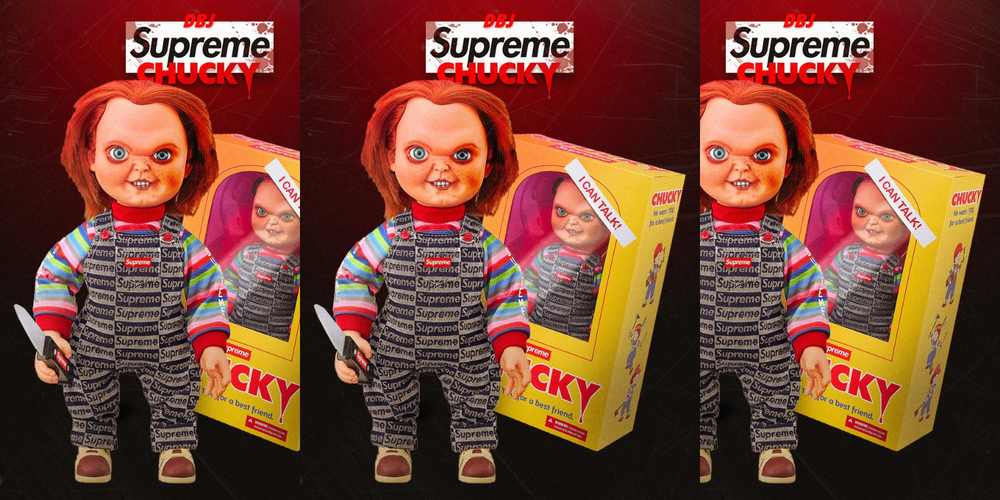 You might not need them, but you secretly want them! Here's the weirdest items on HypeDrop you might've missed.

Whether it's Off-White or Supreme, our favourite brands have pushed a fair few boundaries for trends. From outlandish apparel to mind-bending accessories, 'weird' has taken the meaning of the word luxury to a whole new level - a level of bedazzled travel mugs, Chucky dolls and receipt rugs.

At HypeDrop, you might know us for sneakers, streetwear and tech. But in all their glory, the quirky can be just as enticing. Here's just a few of the weirdest items you could pull from our boxes!

Remember when tumblers were all the rage, and you'd be hard-pressed to visit a Starbucks without climbing through mountains at the door? Well, Versace must have got the memo when they developed their show stopping 'Medusa Embellished' variant. Enriched with crystals, it'll set you back a whopping $1,100 at retail - unless you unbox it on HypeDrop, of course.

Unbox the Medusa Studded Embellished Travel Mug and more in Versace for $292.20 on HypeDrop.

Responsible for some of the twentieth century's most defining work, Virgil Abloh was an iconic designer. But one project no-one saw coming was his collaboration with Swedish giant, Ikea. The full collection of homeware was a head-turner, but his MARKERAD 'RECEIPT' Rug was the most bizarre of the entries. Despite that, would we think twice about laying it proudly in our hallway? Absolutely not.

Unbox the MARKERAD 'RECEIPT' Rug and more in Stonks for $48.75 on HypeDrop.

What do you do with a doll that can't be killed? You create them in their thousands, according to Supreme. Their reimagined Chucky, dressed head to toe in the brand, is a collector's weirdest dream come true. In his classic red sneakers, Chucky's weapon of choice even received the hypebeast makeover. Are you looking for a new friend?

Unbox the Supreme Chucky Doll and more in Toy Room for $95.19 on HypeDrop.

What's your go-to accessory? Is it a backpack? A watch, or a beanie? Think again - if Supreme have anything to do with it, it'd be their take on Cressi's infamous Snorkel Set. The item itself isn't out of the ordinary, but the collaboration is one to marvel. If you're an avid diver, it's a no brainer. And if you're not, who said you can't style it with a traditional fit?

Unbox the Cressi Snorkel Set and more in Suprememe for $40.20 on HypeDrop.

Travis Scott is a popular name in the sneakerverse. But did you know that he's a popular name in home goods too? The rapper released a limited edition body pillow with everyone's favourite chain, McDonalds, back in 2021. Larger than life, and a definite conversation starter, the pillow is a classic example of an item you didn't know you needed until now.

Art figurines have hit the mainstream. From Kaws to Bearbrick and even Funko, the luxury models are collector's gold - and the weirder, the better. Famed for his eerie craft, Javier Calleja's 'Heads PVC Figure' is fantasty-bending. It's kind of creepy, kind of cool. And with a $2,470 retail pricetag, you'd ideally pull it from HypeDrop.

If you're after the weird yet wonderful, there's plenty more to pull on HypeDrop. Take me to the boxes!