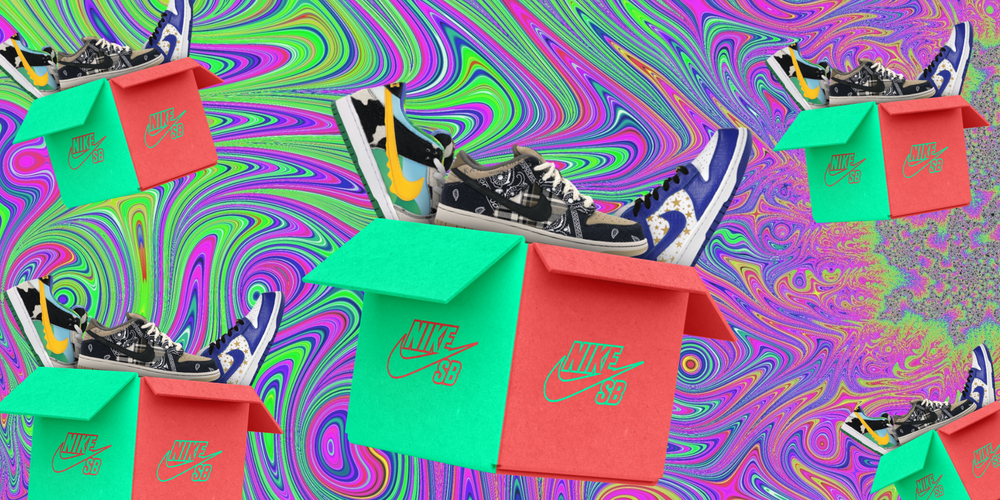 The 50% Mystery Box is rooted in HypeDrop's history, and this is why!

Ever since Dunk reclaimed its title as a holy grail brand, the sneakers have been pretty hard to come by. As a result of game-changing collaborations with cultural powerhouses, easy-wearing colour palettes and all-round comfort, the sneakerverse has seen a Dunk delirium. Hefty resale prices and constant L's in raffles have led sneakerheads to look elsewhere for a taste of the action. And that's where Half A Dunk comes in!

The Mystery Box needs no introduction. Packed with 39 pairs of the infamous sneakers, it's long been one of your favourites. And with a 50% chance of landing on the brand, its risk equals itsopportunity.

If you've been living under a rock, here's the rundown on what awaits inside Half A Dunk!

Overnight, Dunk's rise to stardom hit the sneakerverse like a tonne of bricks. How did it happen? Though we can't know for certain, we'd say it was the result of a few monumental collaborations, plenty of which you'll find in Half A Dunk!

In February 2020, the brand dropped a limited collaboration with La Flame. Idolised among the sneaker community, the rapper's paisley-inspired Dunk launched the silhouette into the spotlight. A few months later, it was Ben & Jerry's turn. Sending shockwaves through the sneakerverse, the Chunky Dunky was a shoe that no-one saw coming, but everyone wanted.

Later that year, in July 2020, Dunk dropped another unexpected collaboration; this time with The Grateful Dead. The band's take on the silhouette was a bold and furry head-turner. Then, in August 2021, it was Virgil's turn to customise Dunk. The 'Dear Summer' collection featured 50 colourways of the sneaker. And though some were favoured over others, the troupe's release is a moment etched in history.

Unbox Dunk collaborations in Half A Dunk on HypeDrop.

The iconic duo-toned Dunk Low is the ultimate wearable sneaker. Available in University Red, Green Glow and UNC, it's a blank canvas for outfit inspiration, with a mass fan following behind it. Though slightly less popular, the trio-toned Dunk Low is just as hard to come by. In Championship Gold and Crimson Game Royal, these variations too have their own cult following.

As with other brands of the same notoriety, Dunk doesn't limit its audience. If you're a pattern chaser, they've got you covered too. From the Dunk Low Dusty Olive to the Dunk Low Pro Parra Abstract Art, the brand has long made a conscious effort to deliver styles suited to everyones palette.

Unbox Dunk Low sneakers in Half A Dunk on HypeDrop.

Finally, the Dunk High makes an appearance. One of the first silhouettes introduced by the brand, the high-top sneaker quickly became a popular basketball shoe - both on and off the court. And though the Dunk Low has since taken its spot on the league table, you'd still be hard pressed to find a pair in stock.

In Syracuse, Game Royal, Moon Fossil and Varsity Maize, the sneakers continue Dunk's legacy of duo and trio-toned designs. In Light Chocolate, Hawaii and Active Fuchsia, they take on an intricate and bolder finish.

Unbox Dunk Low sneakers in Half A Dunk on HypeDrop.