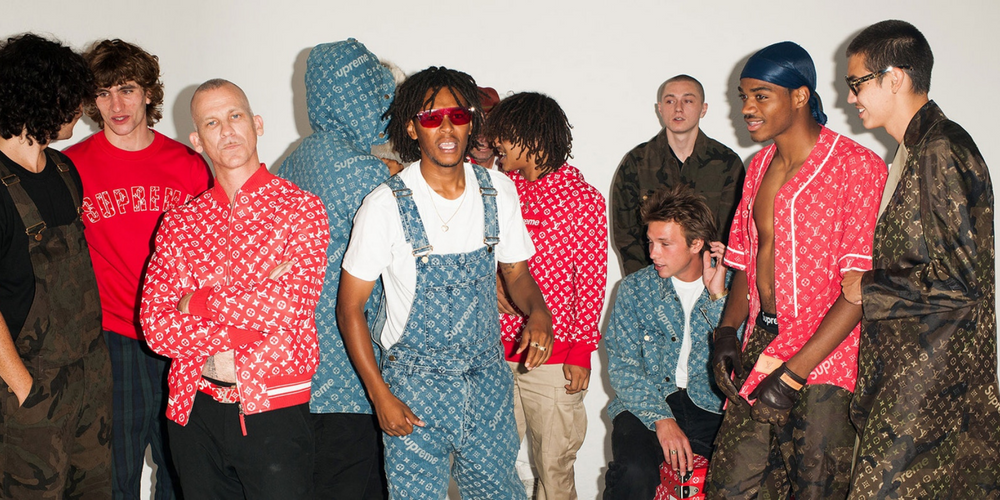 It's the greatest movement in fashion, and anyone can wear it. From Supreme to Palace, here's the biggest names in streetwear!

In the 1990's there was a revolution in streetwear. Once reserved for hip-hop artists, skaters and the cool kids, streetwear made its way into the mainstream, and caught the attention of luxury fashion houses for the first time. All of a sudden, 'slumming it' was acceptable. Shops selling oversized clothes, sneakers and baseball caps quadrupled, and just as fast as the movement grew, there was no sign of it slowing down.

Where brands like Nike and Adidas once dominated the streets, smaller labels picked up momentum. And as of today, they're some of the biggest names in the game.

Trendy, casual and unique in their styles, these brands have revived old school-culture to establish a dynamic shift in fashion. Here's five of the biggest (and best) names in streetwear right now!

The luxury fashion label turned streetwear giant was founded back in 2015 by Francesco Ragazi. Four years prior, the former Artistic Director of Moncler published 'Palm Angels', a photographic book dedicated to skate culture. Like his clothing, Ragazi's book celebrated LA's skateboarders, reimagined through his own vision.

Palm Angels' debut collection released to rave reviews, and the brand has since collaborated with the likes of Playboi Carti and Under Armour on sell-out collections. In a short space of time, Palm Angels has become a unique story teller of bold colours and prints.

One of the OG's, Stone Island was born out of Italy in 1982. It was a hit in Europe, and unstoppable when momentum hit the States.

Early on, Stone Island cemented itself as a brand to watch. Its founder, Massimo Osti, was an experienced garment engineer, having previously founded Chester Perry. His knowledge in the field led to the development of the brand's now-famous Tela Stella fabric - a stonewashed material that would go on to form the foundation of Stone Island's garments.

Across Europe, and thanks to their reflective jackets and colour changing coats, Stone Island was famous. But it wasn't until 2015, when both Drake and Supreme took a liking to the brand, that sales on both sides of the Atlantic skyrocketed. Since, Stone Island's cutting-edge hybrid of technology and fashion has seen the brand go from strength to strengeth.

The outdoor recreation company is a master of streetwear, thanks to the celebrated Nuptse.

The North Face was founded in North Beach, San Francisco in the mid 1960's. From ski enthusiasts to mountain climbers, the brand targeted outdoor-pundits with their catchphrase 'Never Stop Exploring'. But in the 1990's, The North Face shifted to tackle popular culture and fashion with the introduction of the 'Nuptse'.

Almost instantly, the coat became a staple in the hip hop wardrobe. And when figures such as The Notorious B.I.G took a liking to it, The North Face was presented with a brand new audience - younger, cooler and more fashion-conscious. Since, Gucci, Supreme, Vans and Sacai have worked with the brand to develop versatile sports-focused streetwear for all.

Officially founded in 2012, fashion designer Virgil Abloh developed Off-White's aesthetic from diagonal lines and the iconography of industrialised cities. It was popular from the get go, but in 2014, when the brands first womenswear line was selected as a finalist for the LVMH Prize, the pace picked up. If Off-White's name wasn't everywhere after this triumph, it was about to be.

In 2018, the brand developed the coveted 'The 10' partnership with Nike. The collection resulted in some of the hardest to purchase shoes the sneakerverse had ever come across, and cemented Off-White's name among the most successful. This year alone, Off-White has developed a collection of 50 Dunks and is gearing up to release a Jordan 2 sneaker.

A household name, and King of streetwear, Supreme takes our top spot.

In 1994, James Jebbia opened a small skateboarding store on a relatively quiet street in New York City. Initially, Supreme sold skateboards and only released a small collection of their own designs. Had you asked Jebbia whether he could've predicted the brands success today, we imagine the answer would be no.

Realising the need for higher-quality products, Jebbia expanded his collection, introducing hoodies and fitted caps. Quality put Supreme on the map and, before long, skateboarders weren't the only subculture to notice. In 2012, a collaboration with Comme des Garçons brought Supreme to the epicentre of high fashion, leading to further partnerships with the likes of The North Face and Louis Vuitton.

From young teens to rich celebrities, in Tokyo and New York, Supreme has brought together a generation of streetwear enthusiasts.