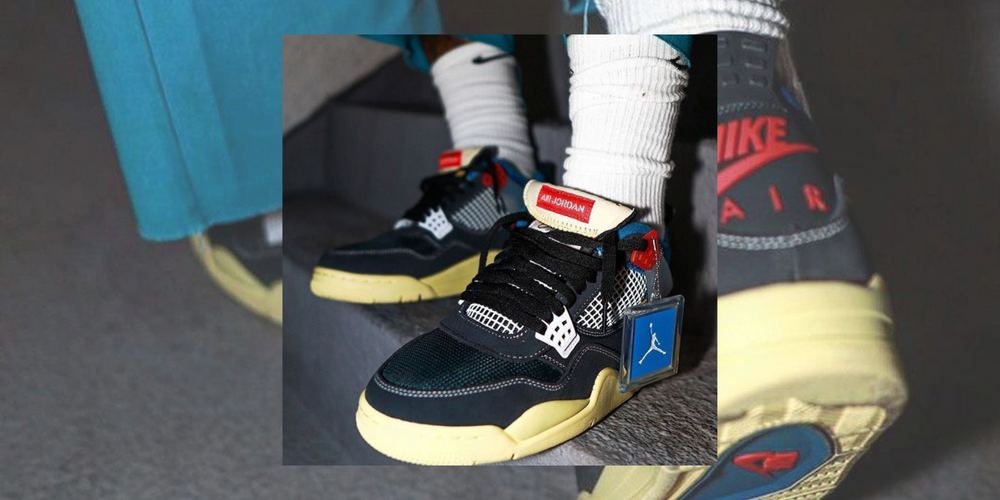 Have you ever wondered what Team HypeDrop's favourite sneakers are? From the Off-White x Jordan 1 Chicago to the Jordan 4 Retro Union, here they are!

If it wasn't already obvious, we're suckers for sneakers. High tops, low tops, leather or canvas, you could call the majority of Team HypeDrop proud sneakerheads. From the Air Force 1 to the Dunk, and plenty of Jordan silhouettes in between, we've picked a few of our favourites to share with you. Are they the same as yours?

Kicking it off with a Jordan 4. In 2020, Jordan and Union Los Angeles joined forces once again to deliver another legendary collaboration. After a two year hiatus, and the huge success of the Union x Jordan 1, it was a comeback with plenty of hype behind it. And it didn't disappoint! The Off Noir Jordan 4 remains faithful to the classic silhouette, with a few extra tweaks. Black and blue, with a sail gum sole and accents of pink, the sneaker features a stitched down tongue and translucent wings.

Unbox the Jordan 4 Retro Union Off Noir in our Jordan IV Mystery Box.

The Air Force 1 had to make our list. For some of us, the classic white colourway is enough. But for others, the University Gold just takes it. Repping Abloh's signature industrial aesthetic, the sneaker is dressed in a rich yellow and metallic silver colourway. With a loosely stitched swoosh and elements across the heel, the sneaker combines leather with exposed sponge. As expected from Off-White, it's finished with a tell-tale plastic zip-tie.

The Jordan 1 is Jumpman's most iconic silhouette. Combine that with the status of Travis Scott, and you've got gold. Released in 2019, Travis Scott x Jordan 1 High is *still* marked at 10x the retail price on StockX. Crafted from a slew of premium materials, and painted in a dark mocha and black colourway, the sneaker is adorned by a reversed swoosh and Cactus Jack motif, typical of La Flame's designs. There's even a pocket around the ankle region for your 'stash'.

No surprise here; the Off-White x Jordan 1 Chicago is one of the most sought-after sneakers in the world, after all. Part of 2017's 'The Ten', Virgil Abloh's take on the Jordan 1 was groundbreaking. A fan-favourite for years, and Michael Jordan’s first signature silhouette, the Jordan 1 Chicago had always been a best-seller. With additional blue stitching around the swoosh, 'Air' printed on the midsole, and an Off-White zip tie on the collar, Virgil's details were just enough to take the heat up a notch.

Travis Scott's second collaboration to make our list is the Dunk Low Cactus Jack. When the shoe was spotted in his music video for JACKBOYS back in 2019, the sneakersphere went wild. And soon after, La Flame's rendition was confirmed to be a public release. Painted in tan and navy, the shoe is adorned with a bandana pattern across the upper, while a tartan print dresses the medial side. Cactus Jack branding can be seen across the tongue, while a white rope-like lace tie completes the shoe.