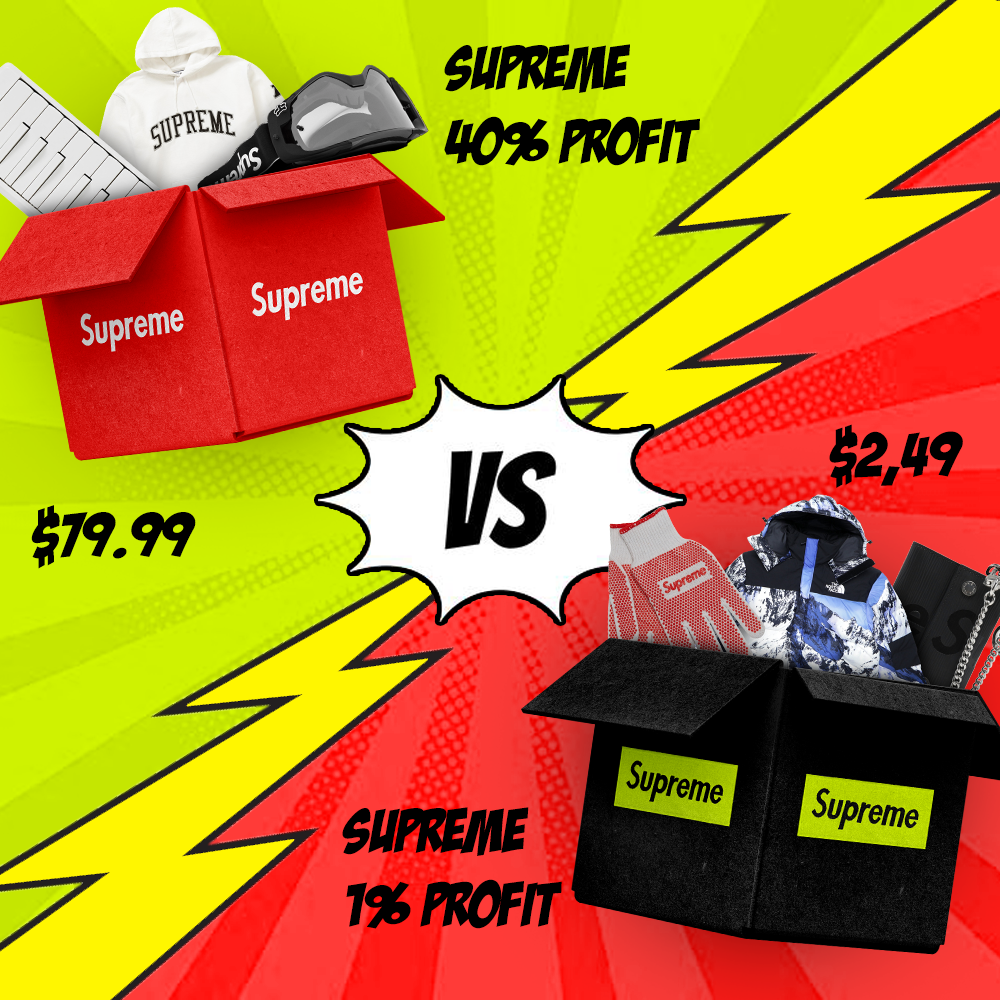 TL;DR: The cheapest boxes may not offer you the best experience

Quite a while ago, we ensured that every single mystery box on HypeDrop will reveal an item worth at least what you paid. That’s 100% guaranteed. But still, we often get users questioning our methods, since when opening boxes on the cheaper end of the scale, they often end up with, well, items on the cheaper end of the scale.
The reality is this: if you’re opening a box worth only $0.99, the chances of revealing say, a $500 ticket item, are slim. Yes, you’ll always make at least your money back - but to really be getting more bang for your buck, you’ve got to go a little bigger with the boxes for the bigger profits. The big ticket items you see on our site and showcased on Instagram are less likely to come from the $0.99 boxes, and more likely to hit when you spend a little more.

The good news is, we’ve made it easier than ever to see how you can profit from HypeDrop. We’ll go into this in more detail below - but in keeping with our transparent approach to mystery boxes, we’re very open about how you can come away from HypeDrop with a profit.

The other truth is that our $0.99 box is among the most popular, since many first-time users want to try HypeDrop out without spending the big bucks. We also totally get this - but it also means that we have loads of the same or similar cheap items that could be unboxed with this option. The likelihood of scoring something worth considerably more is slim, since the reality is that you've only got a 7% chance to get at least double the value that you paid back, and even less to get more than that.

A quick glance at Trustpilot will tell you that we’re completely legit and have winners of much bigger ticket items all the time - and we encourage you to have a read to see why it’s totally safe to start loosening the purse strings and going for the bigger boxes.

How to increase your chances of earning a profit
When scrolling through the numerous boxes we have on site, you’ll notice many have a percentage number in the name. For example, Off-White 10%, or Streamer Pack 20%. This percentage simply refers to the chance you have to profit when you open this box. It shouldn’t take long to figure out that the more expensive the box, often the higher the chance to profit becomes.

If you were to click on the box to have a look at the potential items within, you’ll also see this percentage explained in the little ‘i’ icon. Further to that, each potential item in that box has its own individual percentage amount - and this one refers to the chance of unboxing that particular item.

For example, in the $0.99 Fast Box, you might see that there’s a Gucci bifold wallet to unbox, worth $617.50. But the chances of opening this are 0.0025%, as opposed to a 14.94% chance of unboxing a $0.99 purple knife grinder. We’ve made things completely transparent in this regard, so you’ll always know where you stand when you purchase a HypeDrop box.

Bigger is often going to be better
Along with providing you with the percentages, we’re also going to go one step further and tell you that if you keep opening the $0.99 box, you could end up with a whole heap of knife grinders, albeit in different colours. To really make a profit from HypeDrop, it’s up to you to use the information we’ve given you and start looking at the profit potential from each box, along with the chance of unboxing each individual item within.

Like we said, it’s often the case that the more expensive the box is, the bigger chance you have of making a profit and improving your website experience. We’ll be the first ones to tell you that there’s nothing particularly exciting about unboxing a keyring or something equally cheap. Because that’s not what brought you to HypeDrop in the first place - and of course it’s the bigger ticket items you want to reveal. But in order for that to happen, you’re going to need to spend a little more, think a little bigger, and then watch as those bigger rewards come in.

Plenty of boxes in the HypeDrop sea
At the end of the day, you’re always going to make at least your money back, no matter which HypeDrop box you open. But unless you’re excited by cheaper knick-knacks, the real HypeDrop experience begins when you start unboxing the higher value boxes.

Something we pride ourselves on is the variety of boxes we offer - and these alone are often changing. We make sure to offer a box at every point of the scale, so whether you’re just playing around with cheaper boxes, are serious about winning bigger ticket items, or are somewhere in the middle, you’ll easily find a bunch of boxes just for you. So if you’re tired of unboxing the same items, we’ve got a super-simple solution for that: stop opening the same box, and start exploring the many different boxes we have for different results each time.

Ask and you shall find out
Transparency is the name of our game, and we’re always, always open for more questions. If you’d like to learn more about making a profit from HypeDrop (yes, seriously) or any other aspect of our mystery boxes, then hit us up on Instagram, Facebook, or one of our support channels.