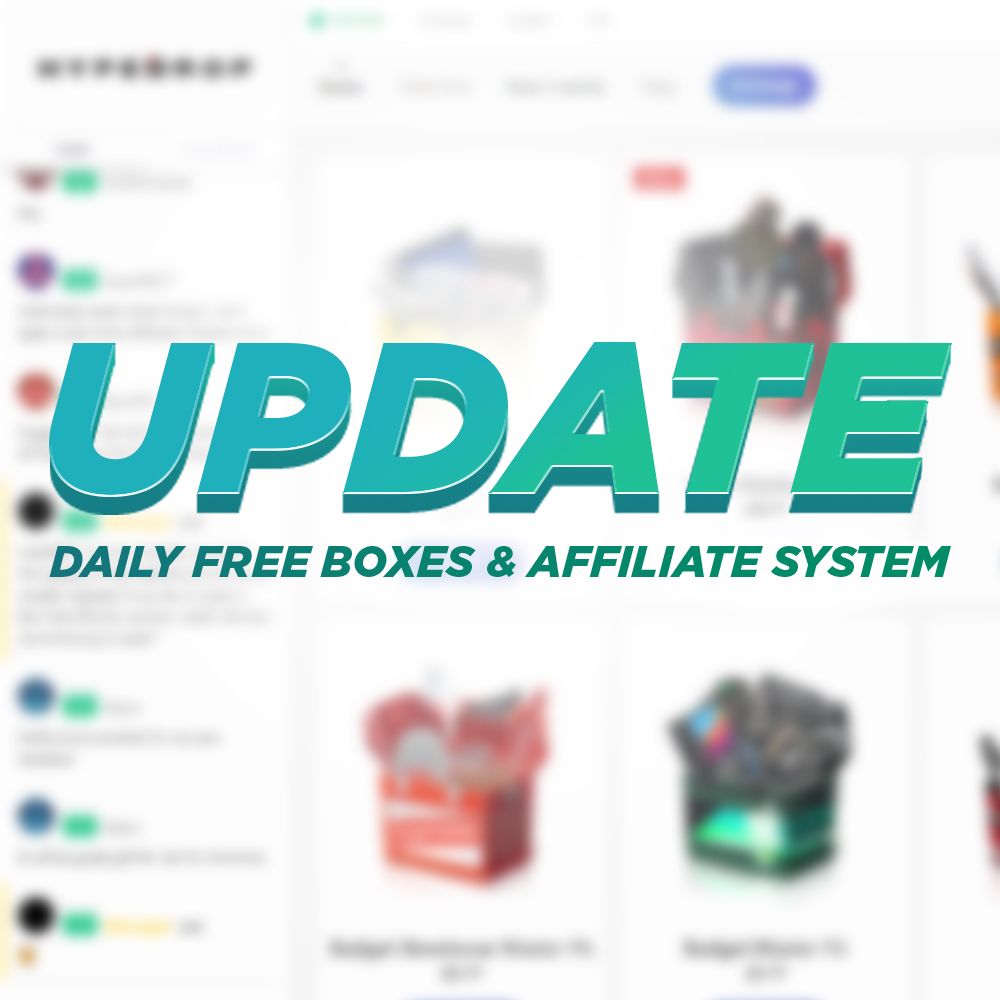 So if you’re keen to earn some extra credit, keep on reading.

Everyone loves free stuff, that’s not news at all. But what is news is that we’ve now added two new features (backed by popular demand) to help you get free stuff. And, if we say so ourselves, both features are going to really change the game.

First off the bat is a new Level Up System, where the more boxes you open, the more rewards you’ll have the chance to earn. The latter is an Affiliate System where you can earn actual credit for every new HypeDrop user you refer. There’s a bit more to both of course, so we’ll go into the nitty gritty below.

If you’re a regular HypeDrop user, this is going to be welcome news. We’ve introduced a Level Up System where you can earn the chance to open Daily Free Boxes and earn a random amount of credit. The way it works is that with each mystery box you open, you’ll earn points towards the next level, which will now appear in your account. We won’t bore you with the numbers right now, but there is a definitive guide to how much XP you need to reach each level on the site.

When you reach certain levels (starting from Level 2, with random numbers until Level 50), you can open a Daily Free Box. You can only open one each day that you’re eligible, so if you’re that keen and you pass a few different levels in a day, you’ll only be able to open one box for that day.

Each box gives you the chance to win a random number of HypeDrop credit, starting from as low as €0.01 and up to a maximum of €1,500. So basically the more mystery boxes you open, the higher the level you’ll climb, and the more chances you’ll have to win more credit to spend at HypeDrop. Sure, it’s going to suck if you land on €0.01 in your box, but it’s €0.01 you didn’t have before anyway.

We’ve also discussed in our team the possibility of adding new and different rewards to the Daily Free Boxes. This is a new concept, so we’re always open to ideas. For now, it’s just credit you can win (nothing wrong with that though) - but stay tuned for updates down the track. And don’t forget - that credit can be used to spend on mystery boxes, just like you would with deposited money. So whether it be hypewear, tech goods or other sought-after products, you can spend your newly-earned credit however you like on our range.

There’s no catch with our Level Up System either - whether you choose to open the Daily Free Boxes or not, you’ll still be earning points with every mystery box you open. So you may as well check it out and score some extra coin!

Get new users; get free boxes.

If you’ve ever seen the referral programmes on Uber or the like, you’ll have a basic understanding of how our Affiliate System works already. We’ll be completely open here: yes, this is a way for us to get new users to HypeDrop. There’s no hiding that - but we’ll now reward you for each new user you bring that makes a deposit, so it’s pretty much a win-win situation.

We’ve now set up this system to give you a code to give to new users. When they use this code to make their first deposit at HypeDrop, not only will they get a free box to open, but you’ll get 5% of every deposit they make. So if they deposit say €200 now, you’ll get €10 credit in your account, just like that. Over time if they deposit a total of, let’s say, €2,000 in total, you’ll have earned yourself a nice €100 credit bonus.

To get started with the Affiliate System, you’ll find your unique code under the Affiliates tab in your account when you log in. When the new user enters this code on the site in the ‘Free Box’ tab, they’ll score their free mystery box and get the ball rolling. It’s pretty simple stuff really.

We’ve seen a few referral programmes with other brands that have gotten out of hand with people abusing the system. So that’s why we’ve implemented a few rules to make sure we’re not shooting ourselves in the foot. At the end of the day, our Affiliate System is intended to reward you for bringing in new users like yourself. We are not encouraging you to spam the internet with your code to bring in random people from all over the joint.

One of the rules is that the new user can only redeem their free box within 24 hours of registering their HypeDrop account. That shouldn’t be a big deal though, since when they’re ready to register, we’d like to think they’re ready to play anyway. The second rule is that if you’re found to have been aggressively spamming sites with your code, we’ll nullify any rewards you could have earned. And the third is that you absolutely cannot create multiple accounts and ‘refer’ yourself. That’s not what this programme is for, and that’s a fast way to ruin things.

All in all, we think our new Affiliate System is pretty fair and gives you the potential to earn some serious rewards. It doesn’t have to be a part of your HypeDrop experience of course, but it’s there if you feel like you could do with some extra credit in your account.

New features require new feedback.
We’ve said it before, and we’ll say it again - we have a radically transparent approach to running HypeDrop, and we plan to keep it that way. If you have any comments on our new features, or maybe even just suggestions on how to improve them, we’d love to hear your feedback. In fact, both the Level Up and Affiliate Systems were the product of user suggestions… and we’re always open to hearing more. Hit us up on Instagram, Facebook, Twitter, or one of our support channels with any questions, comments or suggestions, and we’ll keep working to make HypeDrop even better!