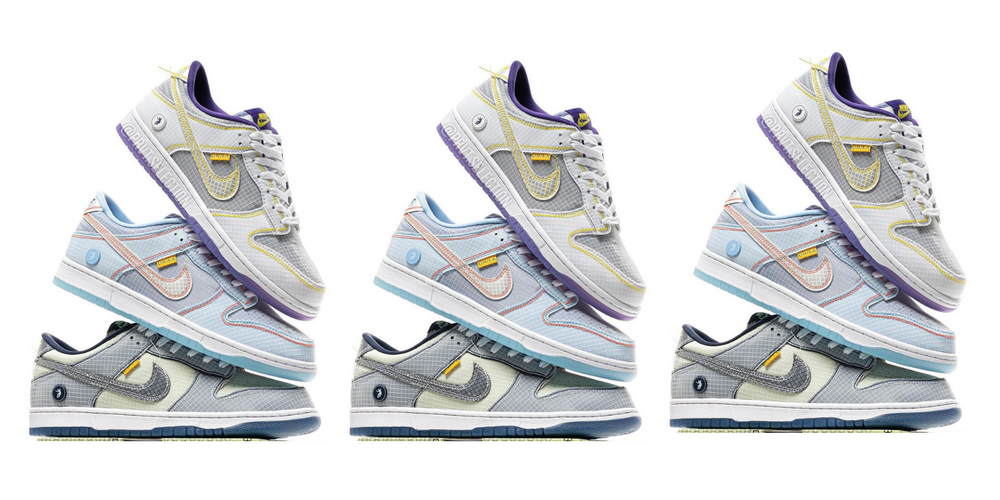 A collection of flight-inspired Dunks, with Union LA's mark. Here's everything we know about the upcoming trio!

Union made its mark in the sneakerverse back in 2018, after generating two hotly-admired Jordan 1's. Following that, the LA-based men's fashion brand lent it's magic touch to the Jordan 4. And now, after expanding their partnership with Nike, Union is gearing up to collaborate with Dunk.

Like the silhouettes before it, the Dunk Low is a sneakerhead's grail. So, the question remains - Will Union get their seal of approval? Or leave much to be desired? Let's take a look!

For the upcoming collection, the team at Union have strayed from the silhouette's traditional make-up. Instead of smooth leather, the Dunk's are dressed with full-grid-patterned uppers. There's exposed stitching, a yellow Union LA tab fastened to the lateral quarter panels and the signature Frontman emblem on each. The 'flight' element is evident in the shoebox, embellished with a special flight-inspired motif and housing a ticket that reads 'Nike In Collaboration With Union'.

The 'Blue' rendition was the first sneaker to be teased by both brands. The grid-patterned upper is adorned with a cool baby blue tone across the forefoot and overlays, while a gradient purple hue meets the quarter panels and collars. Contrasting exposed orange stitching outlines the shoe, and an icy tongue and treading complete the pastel look.

'Midnight Navy' followed. The moodiest sneaker of the trio is coated in a pastel green across the toe boxes, quarters and collars, while the namesake colour dresses the overlays and interior lining. The Swooshes and heel overlays appear to feature metallic silver outers. Darker exposed stitching and fraying on the heels provide an extra layer of flair.

Teased just last week, 'Purple Gold' is the final colourway in the trio. A blueish-purple, gridded base dresses the sneaker, while the overlays are supplied with clean white and vivid yellow exposed stitching. A dark purple treading sits beneath the sneaker, repeated across the collar and branding on the tongue.

The Union x Nike Dunk Low's in 'Blue', 'Midnight Navy' and 'Purple Gold' are set to drop in the coming months.

Union have a few extra plans up their sleeve for 2022. Alongside the Dunk Low collection, the brand has released details of a Jordan 2 collaboration - in 'Grey Fog' and 'Rattan'. Both colourways are constructed in a mix of nylon and suede, with perforations on the overlays, exposed foam tongues and UN/LA tags on the lateral ankle. Recently, rumours of a suede Nike Cortez have also domineered the sneakerverse.

While you're waiting, unbox Union, Jordan, Dunk and more on HypeDrop!