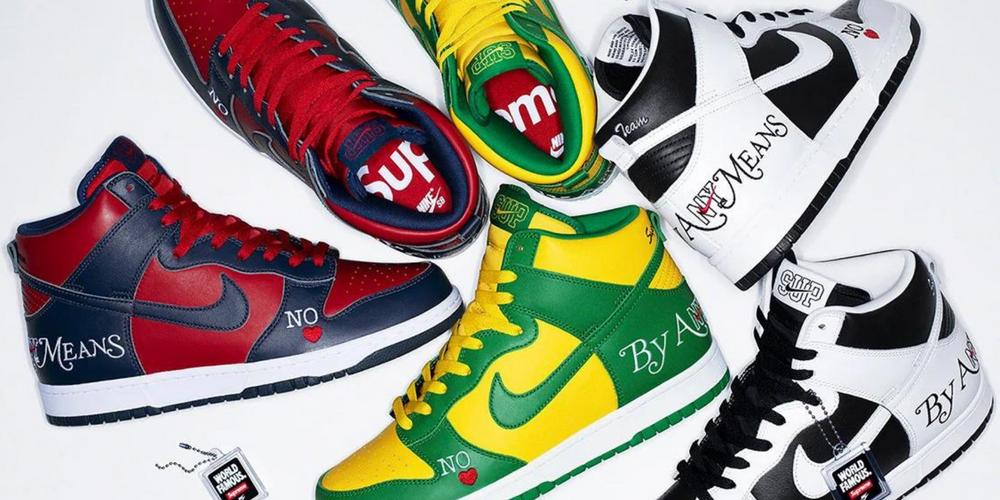 After months of rumours, Supreme x Dunk are set to take over the sneakerverse again!

Following the release of the Louis Vuitton x Nike Air Force 1, the sneakerverse has been on a high. In the first two months of the year, we saw the Jordan 1 High Marina Blue, a trio of Union x Dunks and Ye's 350 V2 Blue Tint. And yesterday, following months of speculation, the Supreme x SB Dunk High 'By Any Means' joined the ranks!

The duo's long-established partnership kicked off in 2002 with an elephant-print reimagination of the Dunk Low. In 2o21, the trailblazers star-studded collaboration set hypebeasts alight. And now, after months of nothing but rumours and teasers, the hotly-anticipated 'By Any Means' collection has landed. If you took a W on the drop, we bow to you. If you took an L... better luck next time. Here's everything you need to know about the contender for 'sneaker of the year'!

In three familiar colourways, the Supreme x SB Dunk High landed in White/Black, Navy/Red and Green/Yellow. Reminiscent of the brand's previous collaborations, the sneakers are differentiated by a few not-so-subtle tweaks. Most noticeably, Supreme's attitude plays out on the shoes embroidered heel phrase - 'BY ANY MEANS', and side embellishment - 'NO', which even features a bright red heart.

The Supreme x SB Dunk High 'By Any Means' trio dropped on March 3rd via Supreme. A second release is planned for NIKE SNKRS soon.

Don't let an L get you down. From Half A Dunk to Supreme Or Not, unbox Supreme and Dunk on HypeDrop!