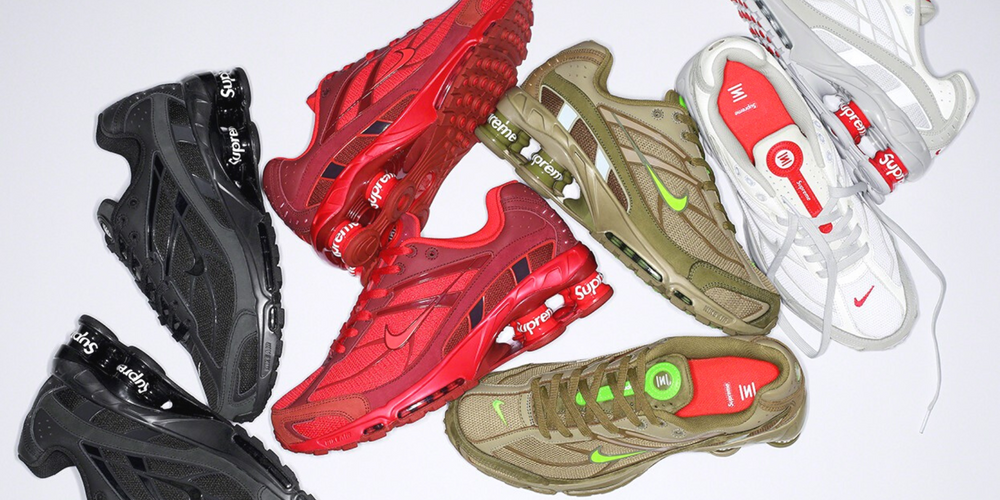 The streetwear giant has reunited with Nike for a quad of Shox Ride 2's! Here's everything you need to know.

A New York skate shop turned billion dollar empire. It could be wishful thinking, but for Supreme, it's a reality. In the same league as Jumpman, the streetwear brand has consistently delivered hype ~ and insane resale prices ~ for the best part of two decades. Like a hypebeast to SNKRS, we'd sniff out that box logo anywhere.

Their independent drops are something to behold, but the label's collaborations with Nike are off the scales entirely. Since 2002, the duo have reworked some of Nike's most cherished silhouettes, from the Dunk Low to the SB Blazer. And now, in 2022, their union has resumed. Taking on the Shox Ride 2, the powerhouse partners have geared up to add another ticket to their resume.

'Made Exclusively For Supreme'

The chunky sneaker has made a comeback, and it looks like Supreme and Nike got the memo! Designed in 2002 as a Nike Air athletic shoe, the Shox Ride 2 is a bold silhouette to take charge of. Constructed from mesh uppers, matching leather overlays, nubuck tongues and heel panels, the electrifying sneaker features two rocket booster-esque pumps at the back.

Re-imagined in four colourways, the sneakers will release in Scarlet, matching Supreme's own signature, All Black, Ice White and Khaki. The Ice White pair feature red branding, while the Khaki pair feature neon green branding. The All Black and Scarlet pair are both branded in their titular colourway. At the back of the shoes, 'Supreme' wording wraps itself around each circular pump.

The sneakers are also accompanied by a collection of Dri-FIT Running Hats, decorated with emboridered logos and a reflective strap closure.

The Supreme x Nike Shox Ride 2 collaboration released globally on June 23rd, 11am EDT via Supreme's website. Don't expect them to stick around for long.

On HypeDrop, pull Supreme and Nike for a fraction of the retail price. From Supreme Or Not to Nike Collabs, what will you land on?