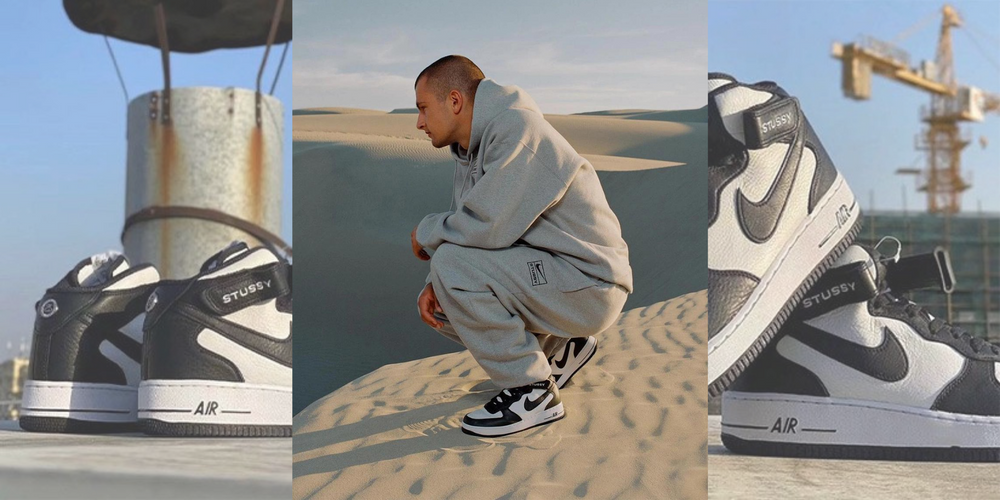 A celebration of the silhouette's 40th anniversary, in three highly anticipated colourways!

From the Huarache to Dunk, the Air Max 95 to the Blazer, Stüssy and Nike have long been collaborative partners. Renowned for their high-profile sneakers, the unstoppable duo have teamed up again in time for the Air Force 1's 40th anniversary - and today's release day!

Combining footwear with apparel, Stüssy and Nike have dropped three variations of the Air Force 1 Mid alongside staple tees, sweatshirts and beanies. In Stüssy's typical fashion, the look is subtle yet tasteful, here just in time for Summer.

Trying to cop? Here's everything you need to know!

In Black & White, Fossil and Black Snakeskin, the Air Force 1 Mid's are understated with minimal notes of co-branding.

While the Fossil pair is crafted from hemp canvas, the Black & White and Black Snakeskin pair opt for a premium leather get-up. Close in style to Nike OG's design, the variation's feature a hook and loop strap and altered toe box perforations, alongside Swoosh branding and Stüssy's logo on the tongue.

Alongside the trio of sneakers, the duo have dropped a collection of tees, hoodies, sweatpants and beanies. In volt, grey and stonewashed variations, the hoodies and pants feature co-branded logos to the left. The beanies, in black and off-white, feature both Swooshes and a Stüssy script insignia, while the 'Peace, Love, Swoosh' tees are designed to celebrate the role of sports in local communities.

Stüssy x Nike's collection drops on Friday 13th May at 10am PT via Stüssy's web store. Didn't get lucky? Nike's waiting for you on HypeDrop!