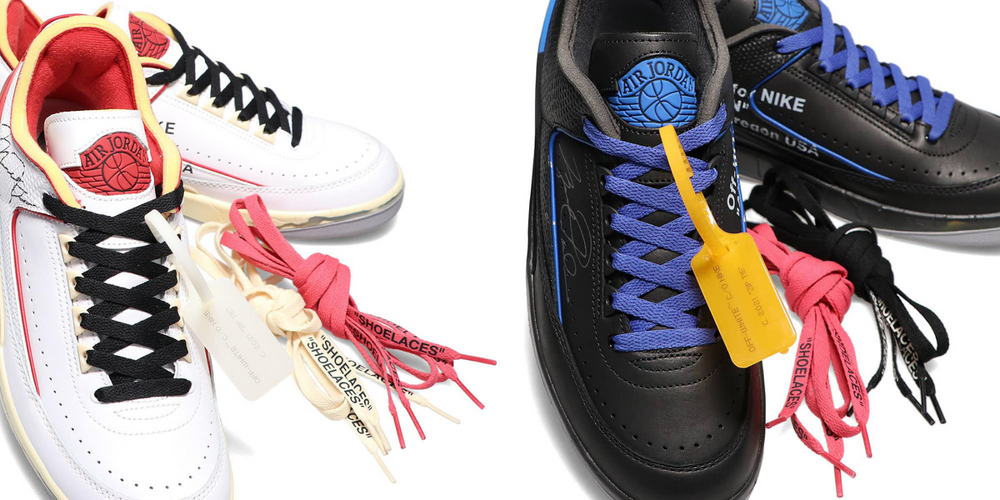 The last sneaker from a legend, a new Yeezy silhouette and a trailblazing colourway. In a year of many, here's the sneakers that topped our wishlist.

For sneakerheads, 2021 was a year to behold. Following delays and reshuffles the year prior, the sneakerverse rewarded us for waiting out a pandemic. Yeezy debuted a new silhouette, the Jordan 4 reigned supreme and some hotly-anticipated rumours finally revealed themselves to be true. And though we lost a legend, Virgil's unforgettable mark on a generation will live for years to come.

From high tops to low tops, Adidas to Nike, here's eight pairs of visionary sneakers we couldn't stop thinking about in 2021.

In March, Baltimore-based skate label Carpet Company teamed up with Nike Dunk on a sneaker. The result? A legendary silhouette, with an immense twist. With a white leather base, the sneaker is fit with Royal Pulse overlays, wrapping around the toebox, heel and Swoosh. But that isn't all; the upper tears away to reveal a series of graphics and the phrase 'Brought to you by the habibis at Carpet Company'. If the sneaker wasn't a winner on first glance, it certainly is on second.

Unbox the Dunk High Carpet Company in Half A Dunk on HypeDrop.

In 2006, the Air Jordan 4 Lightning made its debut. Holding grail status for plenty of sneakerheads (including us), the Jumpman brand brought it back this August... and we've been wearing it ever since. Dressed in nubuck suede, the shoe is tri-toned; vibrant yellow panels, pristine white midsoles and smoky black counterparts deliver an all-over striking look. Loyal detailing, including mesh netting and the Jumpman logo, also feature. The silhouette's iconic, and the colourway's renowned - what's not to like?

Unbox the Jordan 4 Retro Lightning in Jordan IV on HypeDrop.

New in 2021, the Yeezy 450 Cloud White pulled Ye from the edge of a sinking ship. The hype from the Foam RNNR held the brand up for the best part of the year, but a fresh sneaker was due. And a fresh sneaker was delivered. Dumpling-like in design, the shoe is made from a full Primeknit construction, delivering a sock-like fit. With built in eyelets for seamless laces, a ribbed collar and shark teeth inspired midsole, the sneaker was reminiscent of OG Yeezy. Also released in Dark Slate, we'll leave it to you to choose your weapon.

Unbox the Yeezy 450 in Donda on HypeDrop.

Before the Jordan 4 Retro Lightning, we were given the Jordan 4 White Oreo. And though both made our list, this sneaker *just* tops it. In homage to MJ's Jordan 4 White Cement, the clean colourway dropped back in July. Crafted from white tumbled leather, with grey branding on the heel, a speckled finish is applied to the sneaker's moulded eyelets and midsole. For a contrasting pop of colour, a red Jumpman icon sits embroidered on the leather tongue. The best bit? In full family sizing, you can match with your loved ones.

Unbox the Jordan 4 White Oreo in Monochrome Style on HypeDrop.

Following the fatal events of November's Astroworld Festival, conversations surrounding Travis Scott are shrouded in tragedy. In July this year, the rapper worked with Hiroshi Fujiwara and Fragment to deliver a Jordan 1 silhouette. One of the most hyped of 2021, it met (and exceeded) each of our expectations. Coated in premium leather, the sneaker features hits of Military Blue across the toe box, ankle flap and lower heel, distracting from the crisp white construction above.

Nike Air, Fragment and Cactus Jack branding can be seen across the shoe, while a backward Swoosh dresses the lateral panel. Pre-yellowed 'aged' outsoles and black accents complete the design. We'll be wearing the sneaker for years to come.

First reported in June, the hype surrounding the A Ma Maniere x Jordan 1 intensified as the months went on. And when a release date was confirmed for December, it showed no signs of dying down. Dressed in a Sail suede upper and Burgundy reptilian finish, the sneaker is premium in every aspect. Snakeskin dresses the Swoosh and upper lining, while co-branding sits atop of the tongue. Further intricate details include metal lace tips with the A Ma Maniere signature.

Inspired by the Black community's pride, power, influence and resilience in the face of adversity, the sneaker is more than an ultra-luxe shoe. It's a story of generations.

Unbox the A Ma Maniere x Jordan 1 in Battle For Jordans on HypeDrop.

At first a love-it or hate-it sneaker, November's Off-White x Jordan 2 now represents so much more than just a shoe. The last sneaker envisioned by the legend that was Virgil Abloh, it represents his drive for creativity, even in the midst of declining health. It represents his dedication and passion for fashion, and our fortune for having experienced it.

On the black rendition, premium black leather coats the entire sneaker. Blue accents, piping and laces meet Off-White's iconic zip tie. On the white rendition (pictured), the distressed theme is much more apparent. Red and yellow piping, a clear zip tie and black/sail laces complete the look. All in all, it's a sneaker for the history books.

Unbox the Off-White x Jordan 2 in Nike on HypeDrop.

It was a close call. But in our top spot, February's Jordan 1 Retro High Trophy Room Chicago takes it. A collaboration with Marcus Jordan's Trophy Room boutique, the sneaker is a sentimental nod to the NBA star's legendary 1985 'freeze-out'. Despite the controversy surrounding 'pre-re-sale' events, it would be ignorant to dismiss the sneaker for what it is; a masterpiece, in everyone's favourite Chicago colourway.

Featuring premium white leather uppers, glittery red overlays, MJ's autograph on the lateral heel and an embossed Wings logo on the ankle collar, the sneaker is luxurious from sole to tongue. And fit with Nike's Air technology and a translucent outsole for comfort, the quality matches the aesthetic.

What are you waiting for? Unbox one of our best sneakers of 2021 on HypeDrop! And if you don't agree with us, there's hundreds of other pairs to choose from...