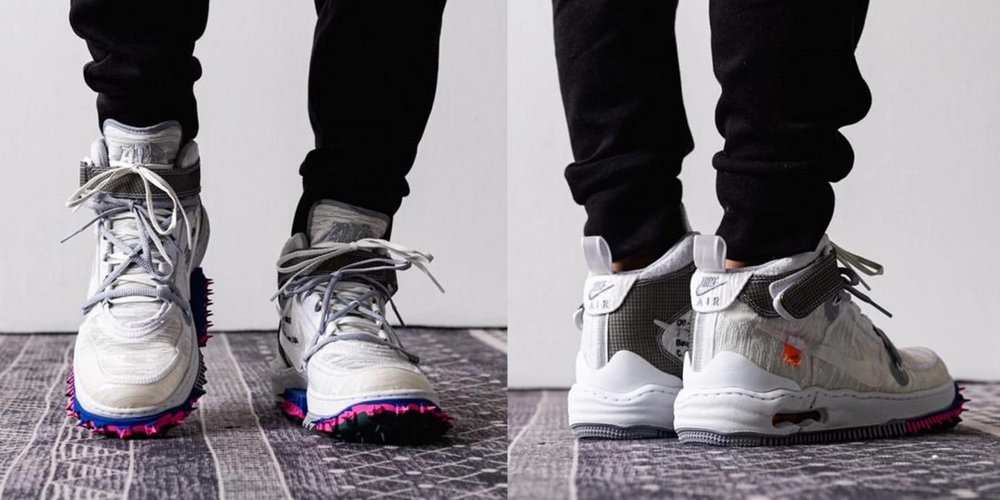 Virgil’s take on the Jordan 2 drops this week. But does the Air Force 1 Mid steal its thunder? Here’s everything we know about the sneaker!

Off-White’s partnership with Nike never leaves us hanging. The powerhouse duo are known for working on multiple projects at once. And their latest reimagined classic is the Air Force 1 Mid. But how does it stand up against the Air Jordan 2 and Dunk ‘Dear Summer’ collection? Not well, if first impressions are anything to go by.

The newly-surfaced pair drew instant criticism on social media for modifications too bold, even for the most audacious sneakerheads. Virgil’s known for his industrialised take. But when his partnership with Nike began in 2017, his alterations were ‘appropriate’ for everyday wear. Four years down the line, and plenty of sneakers later, could it be that his style is now too daring? Let’s take a closer look!

The sneakers were first revealed in white. Throughout the upper, it appears that the usual leather coating has been replaced for a woven-detailed synthetic. Atop of the laces sits a second unit in grey, while the Swoosh is entirely see-through, revealing Off-White’s signature text below. Though, the boldest modification lies underfoot, as the outsole is customised with a multicolour spiked tread. A visibility window is also added, in place of the previously enclosed Air unit.

First-look images soon followed in black. While they appear close in style to the white colourway, with translucent Swooshes, Off-White branding and a multicolour spiked tread, some details have been altered. The second lace unit is coloured in white, while the treads are green, blue and pink rather than blue, pink and black.

While no official release date or retail price has been set, the Off-White x Nike Air Force 1 Mid is expected to release in 2022.