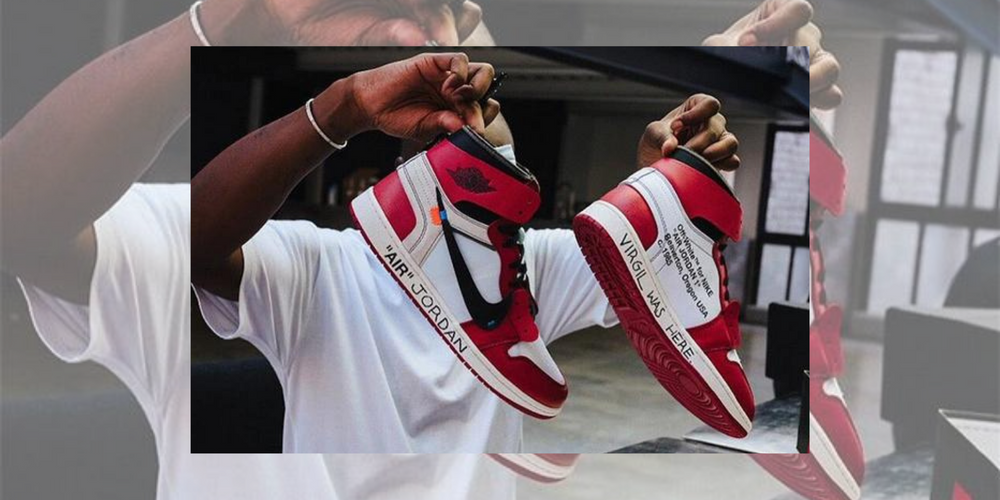 When they first collaborated in 2017, the sneaker game changed forever. Here's how Off-White and Nike have set a precedent in the sneakersphere.

When you think of sneakers, where does your mind fall? Ours lands on Nike. From Jordans to Dunk, the father of streetwear has dominated the industry since the 1970's. It's no surprise that collaborations with the brand are the best in the game, then. More specifically, Off-White collaborations.

In 2013, relative newcomer Virgil Abloh founded Off-White. What started as a vision soon became the brand on everyone's lips. And it wasn't long before Nike realised the hype.

In recent years, designer labels have hung up the brogues and taken to collaborations with sports brands. Sneakers sell, after all. And Off-White x Nike's story is no different.

When Nike welcomed Virgil to the Swoosh in 2017, he ran before he walked. And it paid. With complete creative freedom, Off-White reimagined some of the most iconic silhouettes in 'The Ten'. The collection of deconstructed, industrialised shoes sent shockwaves through the sneakerverse, cementing Off-White's relationship with Nike for years to come. Sales of the Air Presto boomed, and hype for newer silhouettes like the Air Vapormax was bigger than ever.

Merging familiarity with expression, Nike and Off-White have formed a trailblazing partnership. The result? Some of our all-time favourite sneakers. Here's the best of them!

The Off-White x Jordan 1 Chicago is one of the most sought-after sneakers in the world. And it wasn't long before the UNC and White renditions followed in suit.

Virgil Abloh's take on the Jordan 1 is the brand's flagship. Part of 2017's 'The Ten', the Chicago colourway was first to drop. A fan-favourite for years, and Michael Jordan’s first signature silhouette, the Jordan 1 Chicago had always been a best-seller. But Off-White's head turning additions took the heat up a notch.

The rendition was so popular among sneakerheads that Virgil dropped a second colourway, White, in March 2018. And later that year, he premiered a third pair, in UNC, at 2018's Met Gala. Each colourway of Off-White's Air Jordan 1 is worth their weight in gold, selling for 10x and upwards of their retail price.

The Blazer was one of the first silhouettes released by Nike. Formerly the shoe of the moment, Off-White's additions resurrected its popularity again.

Designed in 1973, the Nike Blazer we know today was named after the Portland Trail Blazers. For its simplistic design and affordability, it was long popular. But in the 2000's, it took a dip. That was until Virgil stepped up to the plate.

The reimagined Blazer is among the most coveted of 'The Ten' collection. The sneaker stays true to the OG's wearable design, with elements of Abloh's unique styling and oversized branding. This rendition brought Blazer's back to the limelight, and they've stayed centre stage since.

The Off-White x Air Jordan 4 Sail was one of the most talked about sneakers of 2020. Unveiled at Paris Fashion Week, it had us on the edge of our seats for a release date.

The Air Jordan 4 cemented its legacy in Spike Lee's 'Do The Right Thing'. From there on out, the 1989 silhouette was a sell-out. Virgil Abloh's take differed to his previous styles. The clean cream palette was more wearable than others, with simpler branding and undertones (if you ignore the 'SHOELACES' identifier, that is). Although it was a women's exclusive, it had us all queuing up to cop.

A homage to the first pair of Jordan's owned by Virgil, Off-White's Air Jordan 5 catapulted the silhouette into the limelight.

The Air Jordan 5 can be overlooked in favour of the 1 and 4. There's no denying its popularity among die-hard fans of the Jordan brand. But for the average sneaker enthusiast, plenty of silhouettes fall before it. That was until Off-White entered the chat, at least. At 2020's NBA All Star Weekend, Virgil Abloh debuted his Air Jordan 5 Black. The stylised take on the classic silhouette celebrated Jordan 5's 30th anniversary. Not long after, the Sail rendition followed suit.

In 2018, rumours circulated the sneakersphere that future collaborations between Nike and Off-White would come to an end. Thankfully, the release of the Off-White x Nike Air Force 1 MCA proved them to be false.

Since 1982, the Air Force 1 silhouette has been one of Nike's most popular. They can worn by anyone, with anything. And better yet, they're easy enough to come by. When Virgil took on the silhouette in 'The Ten', it didn't stray far from the OG. In 2018, he revisited the silhouette with colour - first with Volt and then with MCA, the latter of which set the sneakerverse alight.

The sneaker was designed to celebrate Virgil's 'Figures of Speech' exhibition at the (you guessed it) MCA. To this day, it'll set you back 10x the retail price.

In Summer 2021, Nike announced an assembly set to envy 'The Ten'. The Dunk 'Dear Summer' collection featured 50 sneakers from the mind of Virgil Abloh, but some stood out out above the rest.

The Dunk silhouette proved itself to be one 2020's most popular. With a fanbase spanning millions, Off-White's latest endeavour needed to please. But reviews were mixed. There were criticisms on the similarity of the sneakers, with the laces, tongues and zip ties being the only contrasting feature. Lot 1 and Lot 50, however, made an impact.

The all-white and all-black renditions of the sneaker were the first to release. Similar to Virgil's 2019 Dunks, the sneakers held up the collection for plenty of fans, including us.