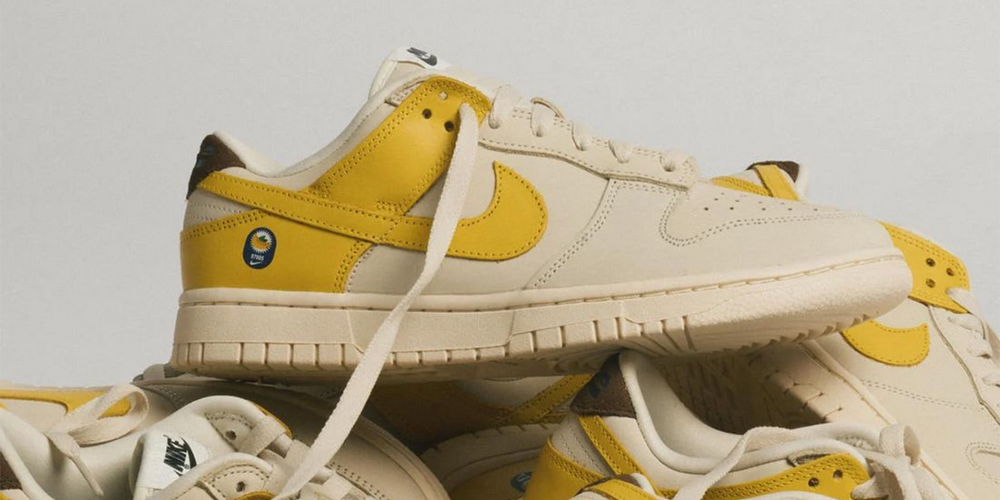 Travis Scott reverses into July, while the Dunk Low takes on an infamous fruit!

This month, Jumpman returns with the ultimate Dior dupe, while Dunk's back to its bold tricks. Union LA's gearing up to collab with Nike Cortez, and Travis Scott is set to resurrect Mocha. Out of all the sneakers dropping in July, here's everything you need to know about the best of them!

Inspired by the nutritious fruit, the Dunk Low Banana features a cream base and perforated toe boxes. With bold yellow accents across the Swooshes and heel overlay, the sneaker even displays a quirky homage to the fruit in the form of a blue supermarket sticker. Finally, a burgundy suede branded badge completes the design.

In the infamous colourway, it's the Nike Air Max 97's turn to wear Bred. Dressed in mostly black leather and mesh, the sneaker relegates red to the Swooshes and detailing across the heel and outsole. With reflective strips across the upper, and Air cushioning units in the soles, it's nearly identical to the OG design.

As a tribute to the New York Knicks, Dunk's latest offering displays a colour arrangement reminiscent of the team's signature colours. Made from smooth leather, the sneaker's Swooshes, overlays and heel tabs are dressed in bold orange, while the toe boxes, quarters and collars are dressed in navy blue.

Unbox Dunk High sneakers in Half A Dunk on HypeDrop.

Following the Chicago pairing, the Jordan 1 High KO is set to take on a greyscale theme this July. With a clean white base, the sneaker features grey canvas overlays, jet black branding and beige collar windows. Underfoot, the tread boasts a textured 'cookies and cream' theme.

Unbox Jordan 1 High sneakers in Battle For Jordans on HypeDrop.

After a hiatus, Travis Scott returned to the scene with a Nike Air collaboration. And now, the Jordan 1 is set to receive his treatment. Long awaited by fans, the Reverse Mocha flips 2019's Dark Mocha on its head. With a brown nubuck base, white leather overlays and beige backwards Swooshes, its a typically neutral take on La Flame's collection.

Don't want to break the bank for the Jordan 1 x Dior? This sneaker has you covered. Almost identical to its high-end predecessor, the duo-toned shoe features a white leather base, with light grey overlays across the toe cap, mudguard, eyestay panels, Swoosh and heel counter. An embossed Wings logo on the collar flap completes the design.

Unbox Jordan 1 High sneakers in Half A Jordan on HypeDrop.

Extending their collaboration catalogue, Union LA is gearing up to take on Nike's original 1972 running shoe - the Cortez. In Khaki Red and Blue Fury, the sneaker features a multilayered upper and striped textile base. A cork insole and speckled sole unit sit underfoot, while duo-toned laces dress the tongue. On the Khaki Red pairing, strawberry pink meets tan. And on the Blue Fury pairing, cyan meets grey.

While you're waiting to cop a new pair of kicks this July, grab some goodies on HypeDrop!