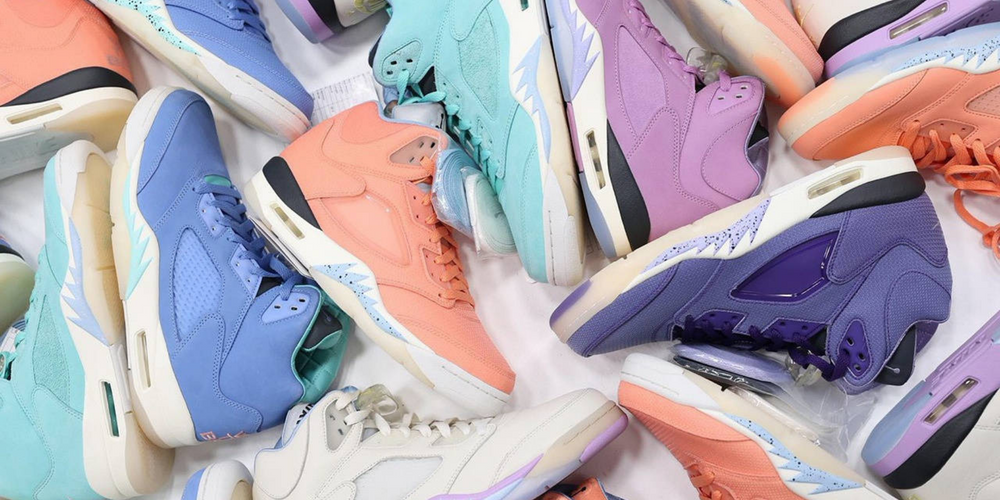 An enthusiast turned designer, DJ Khaled's Jordan collection is on its way!

In recent years, DJ Khaled has become the internet's favourite meme. Be it 'another one' or 'they don't want you to win', the producer's slogans have formed a solid part of our vocabulary. But aside from humour, Khaled's renowned for another passion - sneakers!

Reportedly worth $8 million, the enthusiast's collection is elite. And thanks to his affinity for Jumpman, it includes an impressive line-up of unreleased and limited edition silhouettes.

In April, it emerged that Khaled's relationship with Jordan was set to reach new heights, as the DJ announced his very own collection of 5's for wide release! From bright purple to bone white, 'We The Best' is made up of six wearable colourways. Here's what you need to know!

DJ Khaled x Air Jordan 5 'We The Best' - The Collection

Revealed via Khaled's Instagram, the vibrant sneakers are ultimately coloured for Summer. Landing in purple, coral, pink, bone and two shades of blue, the sneaker's are typically reminiscent of the silhouette's OG design. Shark teeth feature, in light blue with white speckling and lilac with black speckling, as does 'We The Best' branding on the heel.

With satin lined tongues and collars, each sneaker will ship in a special-edition box, with co-branded apparel available to purchase soon after.

There's no official release date for the collection, but whispers suggest a Summer launch! For further news, you'll want to keep an eye on HypeDrop.

While you're waiting for DJ Khaled's collection with Jordan 5, grab a pair of kicks on HypeDrop.