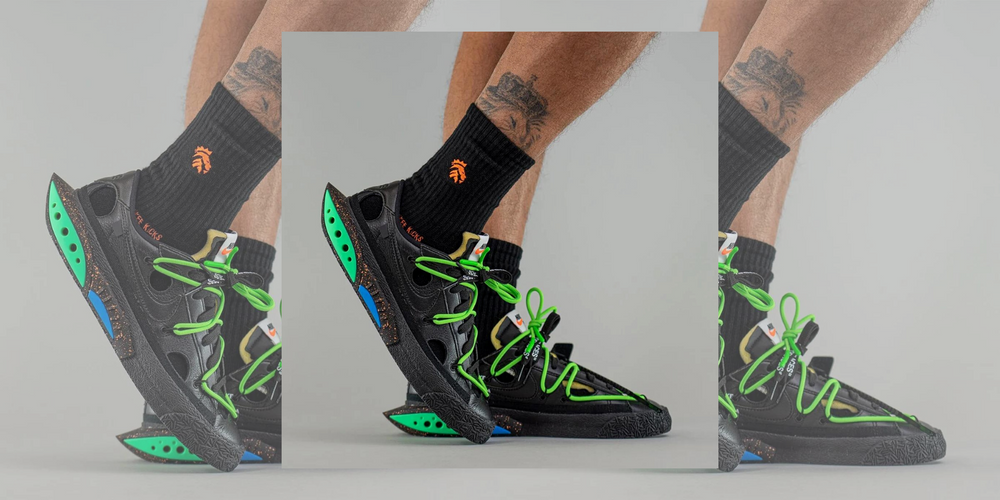 Off-White's back with a Blazer, and Union's making their mark on the Jordan 2. Here's your hottest sneakers set to drop this April!

Thought March's calendar was hot? April's doesn't dissappoint! Following the Jordan 6 UNC and Yeezy 350 V2 Oreo, spring colourways are out in bloom and head-turning collaborations have taken over. If you're looking for a refresh, you're in the right place. Here's our top pick of sneakers to keep your eyes on this April!

Unbox Dunk High sneakers in Half A Dunk on HypeDrop.

Nike's final collaboration with Virgil comes in the form of two Nike Blazer Lows. Although the sneakers retain the Blazer's streamlined profile, they're typically Abloh in shape and form.

Union LA's second addition to our list was originally poised to release during the Holiday season. Dressed in premium suede, the ice-grey Jordan 2 features hints of yellowed-beige across the laces and lining, and rich pops of blue across the eyestayes and midfoot trim. A production sample-inspired tag sits on the collar, while co-branded elements stamp the tongue.

Unbox Jordan 2 sneakers in Battle For Jordans on HypeDrop.

While early images appeared in March, the wait is finally over for the Jordan 5 Jade Horizon. The upcoming retro addition features a light green nubuck upper, continuing onto the laces. Pre-yellowed eyestayes, lace locks and outsoles provide a vintage flair, while a grey tongue and sock liner provide subtle contrast. Finally, a black coating of the midsole highlights the silhouette's infamous shark teeth.

The Jordan 7 Sapphire is futuristically-hippy. The sneaker features a neutral translucent mesh and nubuck leather upper, contrasted by a multi-coloured pink and purple neoprene sock liner. A speckled midsole sits atop a semi-translucent outsole, while black hues layer the Jumpman and details throughout.

At first a Yeezy Supply exclusive, the 700 MNVN Geode is set for a wider launch this April. The modern take on Ye's 700 silhouette dons a lilac nylon upper, flaunting oversized '700' reflective branding. Black 3M accents, typical of the shoe's style, remain across the midsole, outsole, laces and tongue.

Following the success of A Ma Maniere's Jordan 1, the french brand has returned to collaborate with Jumpman on the Jordan 2. Dressed mostly in Sail, the sneaker is closely tied to its predecessor. It features a premium leather textured base, with a snakeskin-like midsole and quilted sockliners. A branded 'MANIERE' burgundy hang tag appears on the heels, while black midsoles and laces complete the design.

Unbox Jordan 2 sneakers in Jordan Or Yeezy on HypeDrop.

While you're waiting for new kicks to drop this April, unbox Jordan, Yeezy, Dunk and more on HypeDrop. Take me to the boxes!