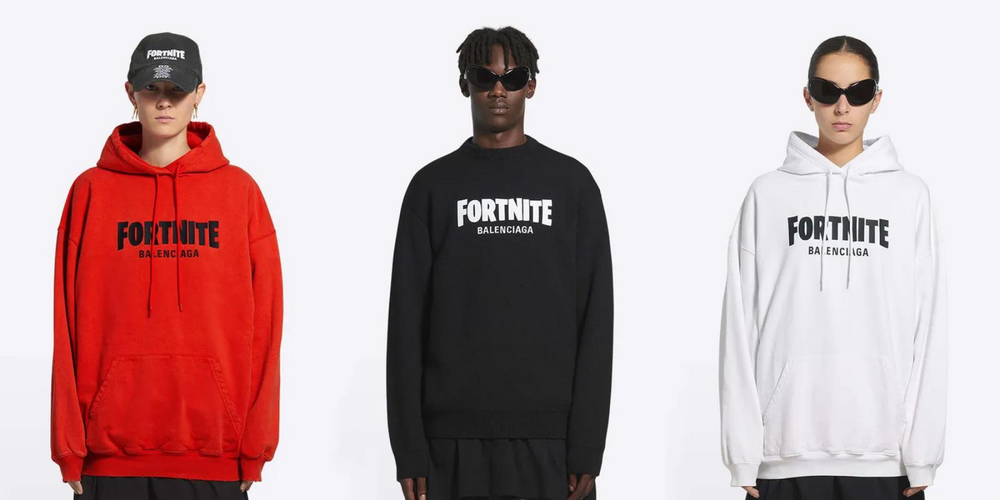 Is it the future of collaborations? Or a trend that's set to die? From Balenciaga to Louis Vuitton, luxury fashion houses have taken to collaborating with your favourite games!

In 2017, a groundbreaking collaboration between Louis Vuitton and Supreme changed the face of luxury fashion. High-end fashion houses had been trying to entice younger, cooler individuals into wearing their clothes. Who knew turning to streetwear labels would be the answer? Now, in their bid to continue to be 'cool', designer labels have taken it one step further... to the gamersphere. From in-game collections of the virtual sphere to physical, wearable apparel, the idea of a Dior x Call Of Duty collaboration has never been more sane.

The Balenciaga x PlayStation collaboration is one of the most recent intersections between fashion and gaming. Debuted via a video game inspired presentation in Summer 2021, the apparel included two boxy T-shirts and a hooded sweater etched with co-branding and 'NOV 2020' text. In celebration of Sony's latest console, it was *slightly* late to the mark, and more expensive than the PlayStation 5 itself. It might be Balenciaga, but where's the one-shot-one-kill?

Apple quaked when news broke that Tag Heuer was set to collaborate with Nintendo on a smartwatch. Released in July 2021, and limited to only 2000 pieces, the collaboration saw the introduction of Super Mario built into various parts of Tag Heuer's UI. The animations followed a reward-based system that tracked physical activity and fitness, with its animated dial serving as centre stage for the man himself. If you ever wanted Mario as your personal trainer, now's the time.

First came the in-game skins, and then came the entire apparel collection. The designer label's foray into the gaming world represented a new dawn in luxury 'gameswear'. The main component of the collection was a bespoke Louis Vuitton x League of Legends Monogram pattern, seen on a variety of the brand's signature pieces. Alongside accessories, the collection featured printed Qiyana T-shirts, a metallic silver leather biker jacket, branded bucket hat, lightweight tracksuit set and plenty more. Let's not forget about the Tambour Horizon watch.

Thanks to its 3D-rendered graphics and iconic list of titles, the PlayStation revolutionised gaming. Combine that energy with a classic silhouette courtesy of avid-gamer and NBA star Paul George and what do you get? The Nike x PlayStation PG collection. In 2018, the limited PG 2 was revealed. Inspired by the console's DualShock 4 controller, the sneaker even featured light up tongues. Later that year, the PG 2.5 was revealed in 3 colourways as a homage to Sony's first ever PlayStation system. Then, in 2021, the PG 5 in White/Blue dropped, albeit to a slight delay. It's lucky there's a few pairs to choose from, as the PlayStation 6 is lightyears away.

Back to Balenciaga. Their collaboration with PlayStation proved so successful that they delved even deeper into the world of gaming. The result? A collection with the one and only Fortnite. The release first came as an in-game exclusive, inspired by digital takes on the brand's runway designs and modelled by Ramirez, Doggo, Banshee and Knight. Taking the partnership one step further, Balenciaga then edged the apparel into the real world. The limited-run collection featured a range of white, red and black hats, T-shirts, hooded sweaters and jackets, each finished with dual branding. Battle Royale in your Fortnite fit? We'll see you there.

Unbox a range of clothing collaborations on HypeDrop!